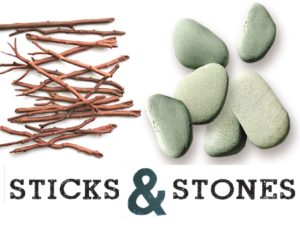 We are in a relationship series called Sticks and Stones. We are talking about what it means to be in Emotionally Healthy Relationships. We want to challenge everyone to see that spiritual maturity requires two things. A relationship with God and the emotional health to love others well. You can’t have one without the other.

For example: you can spend a lot of time with God in prayer and reading scripture but if you can’t love others well, you aren’t spiritually mature yet. Doesn’t that make sense?

To be in an Emotionally Healthy Relationships means, if we are experiencing a relationship with God, it will show up in how we treat people. Jesus told us;

“Live in me. Make your home in me just as I do in you. In the same way that a branch can’t bear grapes by itself but only by being joined to the vine, you can’t bear fruit unless you are joined with me. “I am the Vine, you are the branches. When you’re joined with me and I with you, the relation intimate and organic, the harvest is sure to be abundant. Separated, you can’t produce a thing…” “I’ve told you these things for a purpose: that my joy might be your joy, and your joy wholly mature. This is my command: Love one another the way I loved you. This is the very best way to love. Put your life on the line for your friends. You are my friends when you do the things I command you.” MSG John 15:4-5, 11-15

Do you see the connection? When we are connected with God, like a branch to a vine, the grace that God gives us should naturally surge through us to those around us. We should naturally love others. We said that loving others simply means spending time with others to reveal to them what makes them great or beautiful. Imagine that. Wouldn’t that radically change every relationship you are in?

In this series, we are looking at things in our lives that can hold us back from loving others well. Week 1, we said we can’t love others well if our hearts grow cold. We said that we can be people who do all the right things, pay our bills, do all the right religious things, mow our lawns, but if we aren’t enjoying a relationship with God, if we aren’t careful, our hearts can grow cold.

Week 3, we can’t love others well when we have not dealt with hurt from relationships in our past. That could be hurt from our families that we bring into adulthood or hurt from relationships like previous marriages or friends that betrayed us. Maybe we are walking through pain and suffering today. Those hardships and hurts can stop us from loving or receiving love.

Today, the big point is; we can’t love others well if we don’t know who we are; and why we do what we do.

Do you know who Johnny Manziel is? He was a quarter back at Texas A&M. He won the Heisman trophy, player of the Year, SEC offensive player of the year, etc. in 2012. He left his Junior year at Texas A&M to play for the Cleveland Browns in the NFL.

He entered the NFL as the next great franchise quarterback for Cleveland but he didn’t have the character for it. He was caught partying. Partying a lot. Partying at all the wrong times. When he played, he played badly. He partied and had to enter rehab. He got out and partied more. He had a domestic assault charge that was later dropped. He missed team work outs and it got worse. Now he doesn’t play at all and is trying to get back into the NFL.

When interviewed, he said, “I was self-medicating with alcohol. That’s what I thought would make me happy and get out of that depression,” Manziel said. “When I would wake up the next day after a night like that, going on a trip like that, and you wake up the next day and that is all gone, that liquid courage, or that liquid … sense of euphoria that is over you, is all gone.”  “You are left staring at the ceiling by yourself, and in that depression and back in that hole, that dark hole of sitting in a room by yourself, super depressed, thinking about all the mistakes you made in your life,” he added. “What did that get me? Where did that get me except out of the NFL? Where did that get me? Disgraced?” – Manziel on ABC News Feb 2018

What is Johnny Manziel saying? He was saying, I didn’t know who I was or why I was doing what I was doing. He was in serious pain, emotional pain. To deal with it, he was drinking to get out of depression. And it worked until he woke up and was worse off. What happened? Johnny Manziel lost his career.

That’s the point today. We can’t love others well if we don’t know who we are; and why we do what we do.

I want to give you an example of this in our marriages. Ladies, in general, have you noticed that it is hard for men to communicate? Have you noticed that when you ask questions about their feelings or why they did what they did, in general, men don’t tell you the truth? Do you know why? Research tells us and men verify, in general, men have low self-esteem. We are nervous that if we tell you the truth about who we are or how we feel, you won’t like us. Your relationship with him will dramatically improve when he has the courage to know who he is and is transparent about it.

Again, if you don’t know who you are and why you do what you do, you will struggle to love others well.

I want to read to you the story of Peter. Peter is one of Jesus’ disciples. In his three-year relationship with Jesus, he is transformed. He starts off as a fisherman who always spoke before he thought. He ends up becoming the leader of the first church. I want to read for you one of the moments that changed Peter’s life the most. I want you to see how passionate Peter is as he makes a commitment to follow and die for Jesus and what happens. We pick up the story at the last supper.

31 “Tonight all of you will desert me,” Jesus told them. “For the Scriptures say, ‘God will strike the Shepherd, and the sheep of the flock will be scattered.’   32 But after I have been raised from the dead, I will go ahead of you to Galilee and meet you there.”

33 Peter declared, “Even if everyone else deserts you, I never will.” 34 “Peter,” Jesus replied, “the truth is, this very night, before the rooster crows, you will deny me three times.” 35 “No!” Peter insisted. “Not even if I have to die with you! I will never deny you!” And all the other disciples vowed the same…

57 Then the people who had arrested Jesus led him to the home of Caiaphas, the high priest, where the teachers of religious law and other leaders had gathered. 58 Meanwhile, Peter was following far behind and eventually came to the courtyard of the high priest’s house. He went in, sat with the guards, and waited to see what was going to happen to Jesus. 67 …they spit in Jesus’ face and hit him with their fists. And some slapped him, 68 saying, “Prophesy to us, you Messiah! Who hit you that time?”

69 Meanwhile, as Peter was sitting outside in the courtyard, a servant girl came over and said to him, “You were one of those with Jesus the Galilean.” 70 But Peter denied it in front of everyone. “I don’t know what you are talking about,” he said. 71 Later, out by the gate, another servant girl noticed him and said to those standing around, “This man was with Jesus of Nazareth.” 72 Again Peter denied it, this time with an oath. “I don’t even know the man,” he said. 73 A little later some other bystanders came over to him and said, “You must be one of them; we can tell by your Galilean accent.”

What an incredible moment. Just a few hours ago, he passionately told Jesus that he would follow him and die for him. But when it became real he betrayed Jesus because he was scared. As the rooster crowed, in that split second, the reality of who he wanted to be and who he was, didn’t match up. When he realized that, it crushed him, he just wept. He didn’t know who he was or why he did what he did and it crushed him.

Here is the good news. We can fix it. But you need to know a couple things. It will take time. It might feel uncomfortable. It might be difficult.   It can be one of the greatest spiritual and practical changes you experience.

Ask yourself three questions and ask God to reveal the answers to you.

First, what am I doing? Secondly, why am I doing it? Third, am I stressing out as I try to get God to accomplish my agenda or I am relaxed as I get on God’s agenda every day?

Let’s ask the last question. What describes your relationship with God best? Are you stressing out as you try to get God to accomplish your agenda or maybe confused and stressed so you are trying to figure God out? Or, are you relaxed as you get on God’s agenda every day?

The process of asking these questions over time, can begin to reveal to you who you are and why you do what you do. Then, you will be able to love others well.

How many people do you know who live like this. Who do you know who was raised like this? Very few. In general, we learn to be nice. So, we go to church, to work and sporting events and smile.

I don’t want to be edgy or mean but understand, this is why we have fake churches filled with fake people. They are good people who are going to heaven but they value being nice over being honest. I am not suggesting we should be raw and unfiltered, I am saying, we need to learn how to be honest.

If we are fake, we can smile but on the inside we can be very angry, hurt or sad. When you do not process your emotions, your inside world will not match your outside world. You need to know, your unhealthy emotions will leak into your relationships.

Couple of things you must know.

First, if you ignore your emotions, they don’t die, in fact they grow. They are going to come out someday. And, it won’t be healthy.

Secondly, if you ignore your emotions, you will damage your relationships over time. Marriage. Family. Community. Leadership roles.

Last, if you ignore your emotions, you will be ignoring one of the ways God wants to speak to you. God speaks through our hearts. To ignore our heart, our emotions, is to ignore what God might be saying to us. Now to be clear, we don’t wallow in our emotions but we must know what is happening.