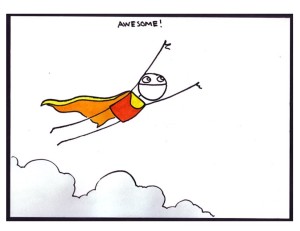 In every area of your life that you are half-hearted, you do the least possible, you are not growing, it is deadly.  It will kill your passions and dreams.  Doesn’t this explain why you don’t like some things?  School, marriage or work.  Maybe it also explains why you don’t like church.

I want to tell you a story from Joshua 7.  To understand it as we walk through it, you need to know that the Jewish people just crossed the Jordan river into the promised land.  The first city they came to was Jericho.  God told them to march around it seven times, they did and the walls fell down.  It was easy because God was with them.  Before this victory, God told Joshua the following.

Joshua 6:18-19  “…watch yourselves in the city under holy curse. Be careful that you don’t covet anything in it and take something that’s cursed, endangering the camp of Israel with the curse and making trouble for everyone.  All silver and gold, all vessels of bronze and iron are holy to GOD. Put them in GOD’s treasury.” MSG

So they defeat Jericho.  They go to the next city which is so small, it’s a joke.  They send only 3,000 men to defeat the city called Ai.  They attack, 36 men die and they run for their lives.  Joshua immediately goes to God.  God said the following.

Joshua 7:11-12  “Israel has sinned: They’ve broken the covenant I commanded them; they’ve taken forbidden plunder – stolen and then covered up the theft, squirreling it away with their own stuff.  The People of Israel can no longer look their enemies in the eye – they themselves are plunder. I can’t continue with you if you don’t rid yourselves of the cursed things.”  MSG

Someone stole the money from Jericho.  They got greedy, stole stuff and hid it.  God said, that’s sin.  We are not moving forward until you deal with your sin of loving stuff more than Me.  Joshua and his leaders discover it’s a man named Achan and confronted him.

Joshua 7:20-21  “It’s true. I sinned against GOD, the God of Israel. This is how I did it.  In the plunder I spotted a beautiful Shinar robe, two hundred shekels of silver, and a fifty-shekel bar of gold, and I coveted and took them. They are buried in my tent with the silver at the bottom.”

Achan wasn’t all in.  He wanted to build his wealth, he didn’t want to advance God’s kingdom.  The result was he coveted the money and hid it.  And he was the reason why the community couldn’t defeat the city of Ai.  No great victories.

Why did I share this story with you?  The first thing I want you do see is that life teaches us that in every area that you are half-hearted, it’s miserable.  You need to decide to be ALL-IN.

At MRC we are building a place for people who are shredded in life.  That’s what we do.  It’s not a place where we are trying to get you to come back every 7 days, it’s bigger than that.  It’s a place where we advancing God’s kingdom.  It’s not a place that is about our likes and dislikes.  It’s a place that asked a much more mature question: How are we at attracting people who are shredded by life?  We are loaded with people in our community who at one time were shredded by life and today are figuring out how to love God.  And you are invited to be a part of that.

I remember the day God shattered my heart at Mechanicsburg Brethren in Christ Church and experienced God’s love, grace and mercy.  It was the beginning of my heart healing.  What I experienced in that moment, I want everyone to experience.  That’s why MRC was created.  So people who have been kicked to the curb of life, could experience the healing of God.

The decision I want you to wrestle with today: find a place, a local church and be ALL-IN.  Because if you don’t your church experience will be miserable, religious, do the least possible.  That is average living.

Are you are ALL-IN?  Can you relate to Achan?  You have time, money and energy and you are hiding it.  Listen, your experience is going to be miserable.  I invite you to advance God’s kingdom.